Spark Asia, winner of Fundnel’s Everyday Ideas competition, secures partnership in India to kick-start maiden voyage overseas
•       Winner of the inaugural Everyday Ideas (EI) competition in October 2015 and subsequently incubated by Fundnel’s experienced management team
•       Leveraged on Fundnel’s online platform and offline mentorship, as well as its proprietary database of regional investors to complete c.S$80,000 pre-seed round in 2Q 2016
•       Expansion with plans to aggregate themselves further within the South and Southeast Asian markets with a follow-on Seed round in 4Q 2016 via Fundnel’s investment platform
SINGAPORE, 28 July 2016 – Fundnel Limited, Asia’s first collaborative investment platform, is proud to announce that Spark Asia, winner of the EI competition, as well as the pioneer startup under Fundnel’s incubation programme, has entered into a partnership with India’s JustKapture. The strategic partnership will allow Spark Asia to penetrate the India market, and growing its database of users, distribution network and business accounts.
Spark Asia is a creative advertising platform whose value proposition lies in its unique ad-supported sponsorship model. The startup attracts users with a free photo printing service while building an extensive database so as to offer customers personalised promotional advertisements on the reverse side of each printed photograph. Similarly, JustKapture is a free photo printing and delivery service that was established in Hyderabad, India in March 2015.
The EI competition was established in order to identify promising startups that demonstrated potential to innovate and disrupt. Winning EI gave Spark Asia the opportunity to be incubated and mentored by Fundnel. The incubation process involved the provision of office space, coaching and mentorship, as well as access to networking and fund raising opportunities. In addition, Spark Asia leveraged on Fundnel’s private investment platform to reach its S$50,000 pre-seed investment target in February 2016. The campaign was oversubscribed by 156% and places Spark Asia’s pre-money valuation at an estimated S$1 million. 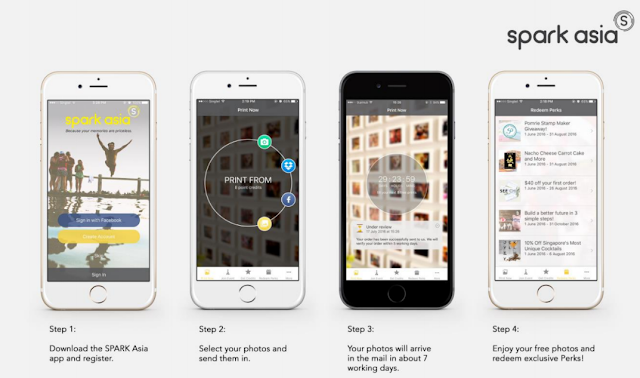 Kelvin Lee, Co-Founder of Fundnel said, “We are proud that one of our very own portfolio companies is now extending its reach into one of the fastest-growing markets in the world. When we first encountered Spark Asia at our EI competition last year, we saw immense potential for them to revolutionise print advertisements and decided to take them under our wing.
Leveraging on our team of former investment bankers, consultants, investment managers and entrepreneurs, we applied our knowledge to help Spark Asia develop their business strategy and operations. Once Spark Asia had a strong business model in place, we sought to connect them with our established community of investors and industry partners so as to successfully complete their pre-seed funding.
Moving forward, we will continue helping Spark Asia in their fundraising efforts as they commence Seed funding. Spark Asia is poised for their next leg of growth and we remain committed to ensuring that they reach their full potential.”
The partnership aims to tap onto India’s growing smartphone market. With growing prevalence of affordable smartphones, more sophisticated infrastructure and large population, the India is expected to overtake the US as the second-largest smartphone market by 2017, while growing at a CAGR of 23% till 20181 an estimated 7.7 billion mobile apps is expected to be downloaded by the end of 20162 of 92% in 2016.
Luke Wu, co-founder of Spark Asia, also said, “As a locally bred startup, we are privileged to have the support of Fundnel in our endeavors to be a regional player. Under the mentorship of their experienced startup professionals, we have been able to build a firm foundation so as to scale new heights, both operationally and geographically.
We chose to partner with JustKapture as they have a similar business model which would facilitate an exchange of resources and data. In addition, JustKapture’s established and diverse presence in India would make a great proxy to the burgeoning consumer market in India and maximise our exposure in a new geography. As such, we are excited about the opportunities presented as we also seek to commence our next round of funding. Leveraging on Fundnel’s strength in fundraising and extensive investor database, we are confident that we will be able to engage a wide group of interested investors in an efficient manner.
Fundnel has opened up a market of opportunities for us. Without the opportunities given to us by Fundnel, we would not be here today celebrating a successful regional launch and we look forward to continuing this fruitful relationship.”

Customers Validate the Advanced Protection Provided by SonicWALL Capture, Now Available With the Release of SonicOS 6.2.6