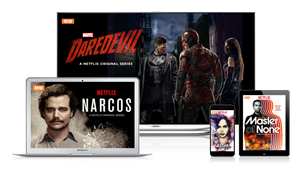 Singapore, 1 April, 2016 – Singtel TV set-top boxes will be integrated with the Netflix app starting 1 April, giving Singtel customers the convenience of accessing Netflix originals, and top quality series and films on their television screens.
This means that Singtel TV customers with set-top boxes connected to Singtel Fibre Broadband can enjoy Netflix via Channel 404 or their remote control’s Quick Access Button. Set-top box integration with Netflix will be performed progressively and completed by the end of April.
Singtel’s marketing relationship with Netflix exclusively allows Singtel customers to get up to nine months’ worth of complimentary Netflix subscriptions if they re-contract or sign up for eligible mobile, fibre broadband and Singtel TV plans.
From now to 22 July 2016, customers can experience complimentary Netflix on their mobile, tablet, computer or television screen when they re-contract or sign up for the following services:
For customers’ added convenience, Singtel also offers direct billing for customers who wish to continue watching Netflix after their complimentary subscriptions end.
Launched earlier this year, Netflix Singapore offers a rich catalogue of popular movies and TV shows at a monthly fee with no contract. For more information, visit www.singtel.com/netflix.