IT Show 2016: It’s time, again, for the coolest tech and hottest deals - The Tech Revolutionist

IT Show 2016: It’s time, again, for the coolest tech and hottest deals

Home » IT Show 2016: It’s time, again, for the coolest tech and hottest deals

IT Show 2016: It’s time, again, for the coolest tech and hottest deals

Highlights include extension of trade-in program to video games and TVs under 34-inch, pre-orders for Uncharted 4: A Thief’s End Limited Edition PlayStation 4 console bundle, over $35,000 of prizes to be won for PC gaming fans plus the latest jaw-dropping gadgets including the $6,000-plus Asus GX700 gaming laptop beast, the Sony α6300 mirrorless camera with the world’s fastest autofocus and the Lenovo Vibe X3 smartphone with in-built virtual reality smarts 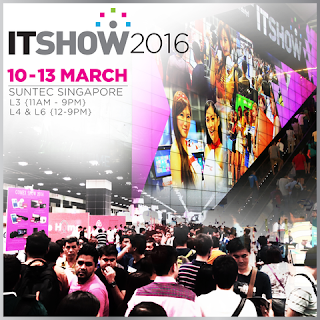 Singapore, 8 March 2016 – Hang on to your old gadgets and games. Because when IT Show strikes again from 10 to 13 March 2016 at the Suntec Convention and Exhibition Centre, you can trade them in for amazing cash vouchers to be used to get new loot at Singapore’s largest tech consumer show.
Started a year ago, the trade-in program has gained prominence quickly and is now recognised as one of the key features of both the IT Show and Comex – the leading tech consumer shows in Singapore organised by Exhibits Inc, a wholly-owned subsidiary of Sphere Exhibits. Sphere Exhibits is the events and exhibition subsidiary of Singapore Press Holdings.
Mr Eric Ng, Head of Marketing, Exhibits Inc said: “When we saw the success of the trade-in program last year, we knew this was the way to go. We started with only three categories and now have eight. Smartphones, laptops, tablets, PCs, monitors, game consoles and now used games and small TVs are all exchangeable for cash vouchers at IT Show 2016.”
Gaming extravaganza at GAMEX (L6, Hall 605)
For the second year running, video games will be getting a dedicated floor on Level 6. From e-sports competitions to exclusive hands-on sessions to the best gaming deals in town, GAMEX promises to be an even bigger hit in 2016.
Sony Computer Entertainment Singapore is taking pre-orders for its upcoming Uncharted 4: A Thief’s End Limited Edition PlayStation 4 console bundle which comes with a unique silk-screened image of Nathan Drake with a matching DualShock wireless controller and a copy of the game. Also available for hands-on experience for the first time is a 5vs5 multi-player challenge for Uncharted 4.
At the Nvidia VR zone, fans of Virtual Reality (VR) will get to try out an exciting VR adventure game by donning the HTC Vive VR headset, complete with motion sensors that track the player’s movements in the game.
E-sports fans will get plenty of action with competitive multiplayer challenges on Fifa Online 3, Alliance Of Valiant Arms and League Of Legends. Catch the exciting plays of the best young local talents in esports at the Garena Campus League finals for League Of Legends. Over $35,000 in cash and prizes will be given out to gamers who take part in the festivities and e-sports competitions.
The top gaming brands will also be featuring huge savings on their latest hardware and software. Don’t miss out on deals from brands like Asus Republic Of Gamers, Aorus, Alienware, Logitech, PlayStation, Razer, Samsung and Steelseries.
Tech Showcase (L4 Hall 405, 406)
For the latest and best deals in consumer technology to hit the market, visitors can visit the Tech Showcase at Level 4, hall 405 and 406.
Leading camera manufacturer, Sony will be launching its new α6300 mirrorless camera, featuring the world’s fastest autofocus speed and capable of 4K video recording. Sony will also be featuring its latest video recording camera, HDR-AS50, packed with innovative video technologies such as the SteadyShot™ image stabilization, smooth zoom, field angle adjustability, as well as 4K Time-lapse capture.
Lenovo will feature the innovative Lenovo Yoga Tab 3 Pro, the only tablet that comes with a built-in projector – perfect for on-the-go video presentations and stay-in Friday night movies. The 14-inch Lenovo ThinkPad X1 Carbon is also a perfect companion for those always on the move. With an 11- hour battery life, the Ultrabook is not only incredibly portable, but its carbon fibre build ensures that it withstands even the most rugged of users.
The Lenovo Vibe X3 or Vibe A7010 can stake a claim at being the world’s first two smartphones with built in virtual reality (VR) technology. Both models will be available at the IT Show 2016, and will come with a VR headset upon purchase.
Not to forget, Asus will also be showcasing the world’s first liquid-cooling gaming laptop system. The ROG GX700 is capable of overclocking and features the GTX 980 graphics chip that allows it to rival high-end gaming desktops in performance.
Brand Time (L4 Stage Area)
Have a question for your latest laptop or handset from Lenovo, Samsung or Sony?
Visitors who want to find out more about the latest software and gadgets can hop on over to the stage area to join the brands in discussion. Created to connect visitors directly with brands and their products, Brand Time sees several leading brands taking to the stage and floor area, to engage consumers to talk about their products and brands.
IT SHOW Babes Selfie Contest (L4, Tech Showcase Area)
No tech show will be complete without beautiful show babes showing off the latest consumer tech. The IT Show 2016 will be no different, and this year will also see one lucky winner walk away with a Sony 5100 Mirrorless Camera (worth $999) by taking a selfie with the IT Show babes and posting it on the IT Show Facebook page at www.facebook.com/ComexITShow.
Also, catch the IT Show babes in action at L4 Stage at 2pm and 6pm!
Event details:
10-13 March
SUNTEC Convention Centre Singapore Level 3 (11am- 9pm)
Levels 4 & 6 (12-9pm)
For more information, please visit:
Website: www.itshow.com.sg/
Facebook: www.facebook.com/ComexITShow