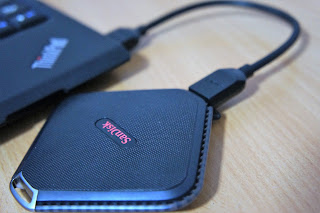 With the dropping costs of NAND Flash, memory manufacturers are churning out more flash based storage devices for day to day usage, as opposed to the standard mechanical hard drives. Solid State Drives has its own advantages and disadvantages as compared to Hard Drives. Today, we are going to take a look at the new SanDisk Extreme 500 SSD and explain to you the pros and cons of an external hard disk drive as compared to an external SSD. 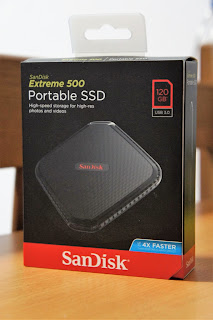 The SanDisk Extreme 500 is a Solid State Drive. This means that instead of conventional mechanical hard drives which depends on the rotational platters and a head for reading and writing of data, we have a storage device that fully relies on electrical logic properties to manipulate data. For the layman, these physical properties of SSDs will result in the end user experiencing a much faster performance. Of course, due to its solid state nature, it is less prone to mechanical damage and will be a great portable storage solution. SSDs are therefore, much more reliable than hard drives.If you have some extremely important data to store and you bring these data along with you on the go, a SSD is much preferred.

However, there are some significant disadvantages of SSD technology. Other than it being pricier than hard drives by storage space, SSDs are said to have a limited number of write cycles. This means that as you write more data across the SSD, you are going to face a drop in performance. However, this is mitigated by advanced algorithm to reduce the number of write cycles on the SSD, resulting in a much longer operating lifetime.

The SanDisk Extreme 500 SSD is uniquely designed to make sure that it is not only durable, but also portable and aesthetically pleasing enough to be carried around. The sides of the drive is protected by a rubber strip that ensure that bumps or drops will not affect the serviceability of the drive. The main casing is made of plastic, which is also textured for a better grip.

One of the edge lies a solid metal bring that allows the user to secure the drive to a keychain or probably a bag. The USB 3.0 port is also covered with a removable cover to ensure that the port is not damaged. 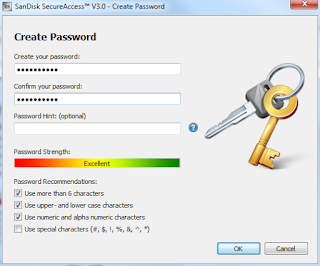 SanDisk has included their SecureAccess software within the drive. This software simply allows all files store on the drive to be encrypted and of course, prevent unauthorized access. This feature will be extremely useful for confidential materials.

The SecureAccess software is easy to use. The user has to first install the software on the computer, set up the password, and he/she can simply drag and drop all the important files into the “vault” for secured encryption. Users will then have to be authorized to access these files by keying in the password on the SanDisk Extreme 500 SSD.

We were extremely happy that SanDisk has overstated their performance specifications on the 120GB Extreme 500SSD. This drive is stated to run up to 415MB/s read and 340MB/s write. Based on our tests on CrystalDiskMark, the drive’s sequential read and write was able to go beyond those speeds, reaching the performance of 435MB/s on read speeds and 374MB/s on write speeds.  The numbers on the benchmark really shows how speedy the SanDisk Extreme 500 SSD is.

We decided to run the same test on a 1TB hard drive and a USB 3.0 Thumb Drive to show the main difference in terms of speed. We can see that the hard drive’s performance is extremely low as compared to the SSD, and it probably would not make sense to run any applications directly off the hard drive. A thumb drive would be a good alternative for your storage of data, but for the ultimate speeds, there is nothing that stands in the way of a SSD.

The SanDisk Extreme 500 SSD is a perfect choice for those who has got a lot of valuable data. Its fast performances makes it ideal for storing and processing of videos and photos directly on the drive. It could also be a good way to store program and games on the drive, and playing them by loading directly from the SSD. It would be much faster than reading the program and games off from a standard HDD.

If you are thinking about getting a Christmas gift for your photographer/gamer/geek friend, why not consider the SanDisk Extreme 500? This piece of excellent storage hardware will definitely improve their daily computing productivity. Your friends will appreciate your thoughts that you have put in.