Ever since the launch of Windows 8 last year, the number of Windows 8 enabled devices have increased over the months. Currently, almost every single new PC on the market runs on Windows 8, be it desktop computers, laptops or tablets. Of course, Windows 8 also brings in new possibilities of hybrid convertible devices which switches between the usability of a laptop and a tablet pc. Different vendors have got different ways to make their devices “transform”. Today, we take a look at HP Envy x2 tablet PC to see if this Windows 8 convertible transform itself well to fit different user scenarios during work and play. 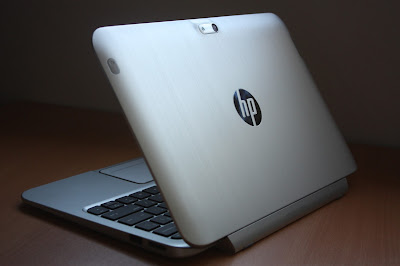 The 128GB version of the HP Envy x2 was recently launched in the US. This convertible Windows 8 tablet PC tries to bring out the best of both world in Windows 8 thanks to its 2-piece detachable keyboard design. It runs on Windows 8 Professional rather than the usual vanilla Windows 8, meaning that this device is a whole different type of machine altogether. It’s especially useful for corporate users as it has bit-locker data encryption support for enhanced data protection on the system especially if the device is storing confidential information. Windows 8 Pro also allows corporate users to connect to their corporate network. However, other than additional features of Windows 8 Pro brought about to this new Windows 8 convertible, let’s also take a look at the different aspects of this system that makes it different from the rest. 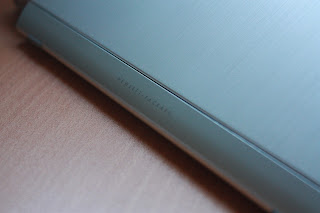 The HP Envy x2 is housed in a nice vertically brushed aluminium casing, giving it a very classy look. Additionally, it keeps the tablet device free from greasy unappealing fingerprints. The back of the tablet device spots a noticeably big HP logo which may not be attractive to certain buyers.
Buttons are well integrated into the tablet device and are not found popping out of it like most tablets, meaning that it will be less prone to accidental button presses. Also, an 8 Megapixel camera with LED flash is also found at the top of the back of the tablet for quick photos at the right angle. A front 2 Megapixel Camera is great for usual Skype calls and the two microphones found beside it make stereo recording possible.

Looking at the tablet screen, we thought that the 11.6” was just right for productivity applications with its native 1366 x 768 resolution. Anything bigger than size that would mean less portability. The decision to use an IPS panel allowed us to view the screen at almost any angle, proving it to be a great entertainment device. 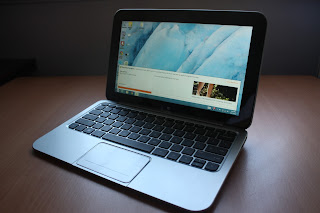 Speakers on this tablet device is also neatly hidden at the bottom of the display screen, possibly imitating the same design as of a TV sound bar. Moreover, these speakers are also backed by popular Beats Audio software found installed on the device. A Windows button is also found on the tablet device to allow users to quickly navigate to the Windows Menu and get access to their Windows Store applications.

The docking station for HP Envy x2 does not only bring typing capabilities to the tablet PC, but also extends the system’s battery life.  The full sized chicklet style keyboard gives the same experience as typing on a usual notebook computer and we thought that this kind of experience is definitely needed for those who use the HP Envy x2 as a productivity device. The docking station also brings along some expansion ports which are 2x USB 2.0 ports, 3.5MM In/Out Audio jack as well as a HDMI video/audio out port.

The docking mechanism brings a one of a kind design to Envy x2. When the device is in laptop mode and when opened up, it is tilted at an angle to allow better ergonomics. Of course, this also allows the tablet unit to dissipate heat more effectively, keeping the system cool and stable.

• Beats Audio
Beats Audio Software on the machine did some tweaks to the audio coming out from the system. However, we felt that the tweaks was more apparent when used it with headphones instead of the speakers. With headphones, we experienced greater bass and better clarity with an overall louder volume. Surround sound feature also gives a better movie experience. 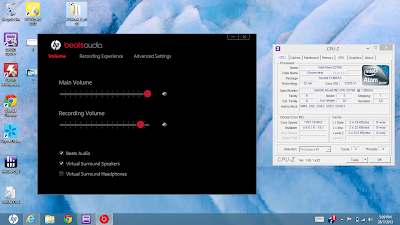 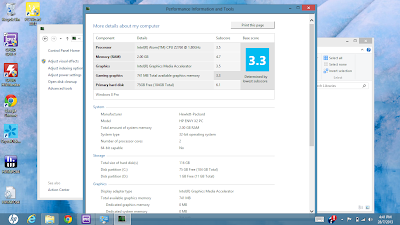 HP Envy x2 was largely bottlenecked by its CPU, which is an Intel Atom Z2760 dual core processor running at 1.8GHz. As for a tablet device, the Atom processor could be decent enough for entertainment usages but definitely not for gaming. Thanks to Envy x2’s SSD, we are still able to get a very responsive system.
Crystal Disk Mark 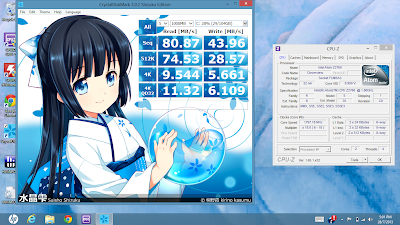 When testing the speeds of the SSD found on Envy x2, we realised that speeds weren’t as quick as what we expected. We were only able to get speeds of up to 80MB/s and 43MB/s Sequential Read and Write Speeds respectively, which is in fact mediocre for SSD speeds of today’s standards. However, we are still getting the benefits of your usual SSD, having fast access speeds and better reliability.
A further look into the hardware specifications of Envy x2 made us realise that the SSD has a name of “MMC” which means MultiMedia Card. Could HP be using a MMC instead of an actual SSD? That could probably answer the speeds shown in Crystal Disk Mark. However, do take note that we are running the benchmark on the OS disk, which could reduce results on the benchmark significantly as the disk would be having many operations at that same time. Sadly, no other information on the SSD was provided.
Passmark Performance Test 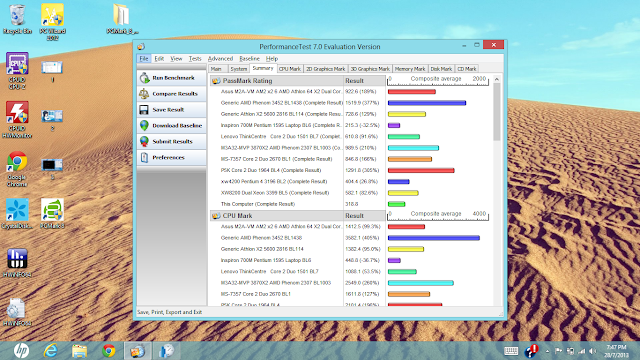 Passmark’s Performance Test give us a gauge to how the system is compared to others in terms of performance. After running the benchmark, we can see that performance is about that of an Pentium IV PC. Of course, for an ultraportable PC that significantly uses less electricity as compared to previous generation’s, it’s an breakthrough for Intel. Just don’t expect to run games on this machine. For daily computing usage, it’s probably more than enough. 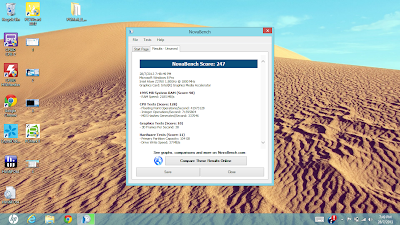 We also gave NovaBench a try to see what kind of speeds we are getting, running on different benchmarks for different components of the computer.

The Good
We found that
there are many small details which the designers and engineers looked into which
made the HP Envy x2 a tablet device different from others. Features like
putting the tablet device at a tilted angle when in laptop mode and enabling
Windows 8 gestures on the trackpad are just example of innovative features on
this tablet, making it unique. HP has also made it a point to install
less crapware on this tablet PC, meaning that you’ll have more space for your
own files! This is probably one of the most sought after requirement of users
for branded PCs, but some vendors aren’t just listening. Kudos to HP for little useless
crapware!

We also thought that HP Envy x2 also had a decent camera that works
quite well in focusing on objects at a varying distance, making it a good
contender as a portable everyday device.

The Bad
However,
there were some things which we didn’t really like and we hope that it could be
improved.

Firstly, there wasn’t any Ethernet port found on the docking station.
One could argue that an Ethernet port is not required, but as this machine
comes with Windows 8 Professional Edition, we believe that many buyers will
come from a corporate background and will need an Ethernet port to connect to
their corporate network. A USB Ethernet adapter can solve the problem, but it’s
additional cost taken by the user.
Secondly, also the screen of the tablet PC
is quite good, we disliked that it had quite a thick bezel. The 11.6” device is
in fact much larger than what it is supposed to be because of the thick bezel.

Thirdly, we felt that the built-in speakers is substandard, even though is said
to have Beats Audio enhancement technology to it. Audio quality just didn’t
reach a desired level and the software tweaks made to it didn’t much help.

Lastly, we felt that the Atom processor is still not reaching performance
levels of what is required of a standard everyday entertainment PC as there was
some stuttering when we played 1080p YouTube videos on the machine, but this
problem has got nothing to do with HP. This problem will most probably be
resolved when Intel releases a newer and faster Atom platform next year. Well,
we still loved the fact that this Atom processor allowed us to install standard
x86 desktop applications!

HP Envy x2
is available at all major retailers including but not limited to Courts, Harvey
Norman, Newstead, Challenger and Gain City at S$1099. The 64GB version can be bought locally, but the 128GB version is only available on the US online store.

Rumoured Nokia Lumia 729 to come with a PureView Camera