OCZ announced their new Vertex 3.20 SSD as a refresh Vertex 3 back in February. In case you did not know, the actual Vertex 3 has reached EOL status and OCZ will not be manufacturing any more Vertex 3 for the market. Instead, Vertex 3.20 will replace all current Vertex 3 shipments.

These new SSD will be manufactured with 20nm MLC NAND flash as compared to previous 25nm. As the drive has just reached our shores, we put it to the test to let you have a comparison between the two drives, allowing you to make a more informed choice when buying a new SSD in 2013. 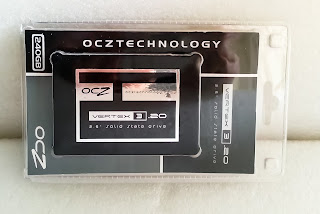 The set coming into Singapore will be packaged as above. That also means that it will not come with 2.5″ to 3.5″ brackets for those who want to put it in a standard 3.5″ hard drive slot. Packaging is rather simple, and hopefully will reduce actual prices when it reaches stores. 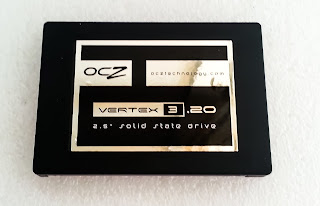 In fact Vertex 3.20 external case is identical to Vertex 3, just that OCZ changed the sticker on it, adding an additional .20 to differentiate it.﻿ 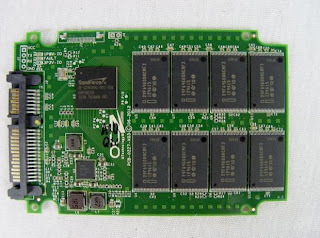 Both Vertex 3 and Vertex 3.20 uses the same SandForce SF-2281 controller. The difference between the two SSD is the changed in NAND chip component. Vertex 3.20 now uses a new Intel 20nm flash chip. 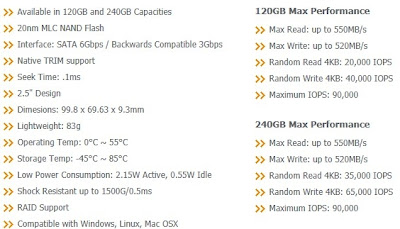 ATTO Disk Benchmark does indeed show that the SSD plateaus at the rated speeds based on its specifications, i.e. 550MB/s Read and 520MB/s Write. 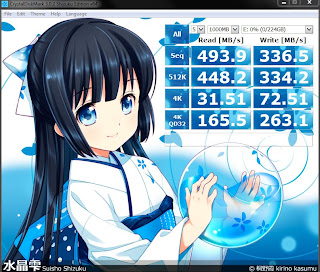 However, when tested on CrystalDiskMark, a popular SSD benchmarking utility, Vertex 3.20 was shown to be slightly slowly once all 5 times of tests were averaged out. Sequential Read and Writes are still decent, but not top notch. ﻿
﻿

As for HD Tune Pro which in fact is a utility used mainly for hard drives, we are still able to see sustained speeds on the SSD for random access reads and writes, which shows that speeds for both 1MB and random sizes to be above 400MB/s. However, when dealing with smaller transfer size, the drive is seen to suffer when compared to higher end models like OCZ Vector and Samsung 840 Pro with Vertex 3.20 at only half the speed.

As compared to other SSD available on the market, it is seen that Vertex 3.20 excels in sustained sequential read speeds like most newer SSD. However, its write speeds are far from the best SSD on the market and can be compared to more mainstream drive such as Plextor’s M5 Pro XTREME.

The “new” Vertex 3.20’s place in the market when paired together with Vector should be similar to how Samsung places their product in the market, where 840 series are placed at a lower end market as compared to 840 Pro. However, As seen from the benchmarks above, Vertex 3.20 is still slower than both its big brother Vector and 840 Pro in terms of speeds, but are decent in terms of a new upgrade from a standard hard drive.
Write performance on the Vertex 3.20 is still far better than a standard Samsung 840. If Vertex 3.20 is priced well for our local markets, I believe that this drive will attract most value oriented PC builders as the SSD of choice and will be selling like hot cakes.
Prices of Vertex 3.20 are still being confirmed as this new SSD has yet to reach shops in Sim Lim Square. However, we do think that it will be priced competitively compared to Samsung 840, which are already popular locally.

The review was first published by poor_poor for The Tech Revolutionist.

13 Reasons why VivoTab Smart is better than Surface RT