A look at ASUS GTX670 Mini OC - The Tech Revolutionist 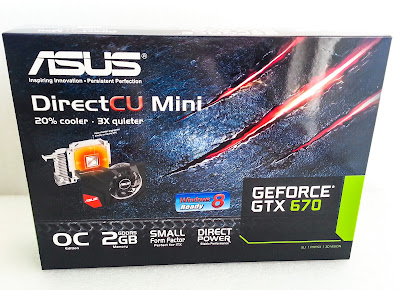 In Singapore where land is scarce and proper space management in a housing unit is always exercised, gamers prefer to build small form factor computer systems rather than huge mega rigs. Small form factor computers usually come in Micro-ATX or Mini-ITX form factor. For those who really want a simple computing unit, mini-ITX should be the right way to go. However, a gamer should always look at Micro-ATX system builds. Additionally, a SFF microATX case and a decent gaming graphics card should get the job done.

This “Mini-Size GPU” is based on GTX670 from NVIDIA. It has a custom PCB sized at only 17cm, and also features a new version of DirectCU cooler with copper base vapor-chamber technology. 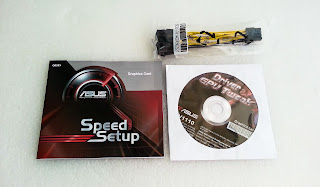 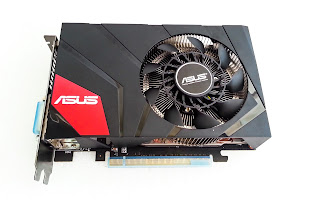 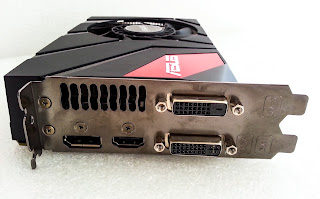 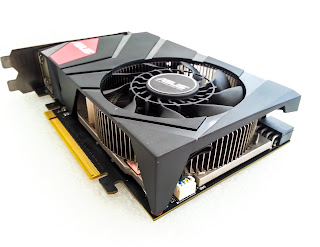 Simply put the card to a single PCI-E x16 slot on the motherboard to install it into the system. 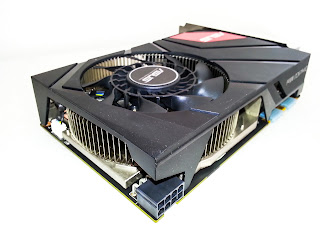 GTX670 Mini uses a single 8pin GPU power connector to power itself. The card would not work without this additional power source. Do also make sure that the system power supply unit is rated at at least 500w and above for GTX670 Mini
﻿

GTX670 Mini supports quad-SLI, and 4 of these card can be put together in a single system for the ultimate gaming rig. GTX670 can be mix and matched together with other regular GTX670 for SLI Configuration as it is essentially a GTX670. 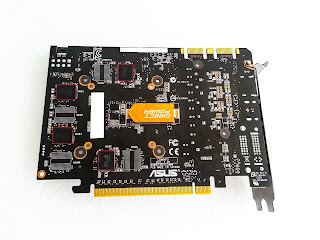 A “Direct Power” copper heatsink is found at the back of the card to spread heat from the inner PCB layer and lower the overall temperature of the card. This is a unique feature comes as an addition from the engineers at ASUS to provide an overall more stable card without heat issues.
In case you did not realise, the “Direct Power” heatsink is pointed at the SAP caps which are added onto the card for the extra overclocking headroom.﻿ 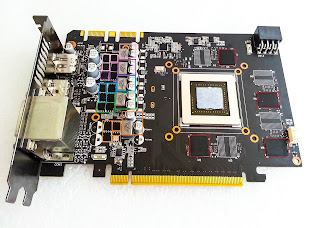 This card uses a 4+1 power phase. There are colour coded boxes in the above image to show the specifications of the components on the card. 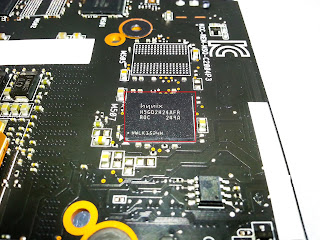 The card uses Hynix H5GQ2H24AFA chips. A total of 8 memory chips are found on the card giving the card a total of 2GB GDDR5 VRAM. These memory are interfaced at 6Gbps. 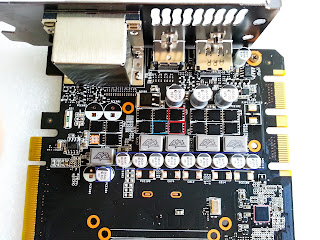 Purple: This card is configured with solid capacitors which are made in Taiwan
Pink Richtek RT8867A PWM 4-power phase controller 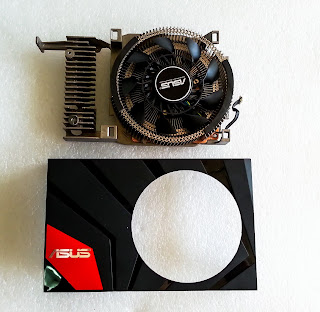 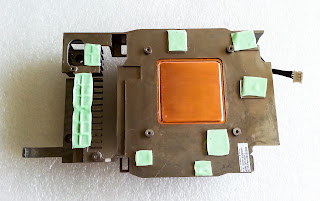 The new version of DirectCU cooler comes with copper base with vapor-chamber technology. Within the main heatsink, it appears that ASUS has used a combination of an aluminium base plate which essentially cools the memory chip and VRM.

With 20 minutes of stress test on Furmark, Asus GTX 670 Mini DirectCu manage to keep the card cool at 57% of fan speed, resulting in an eventual 79 degree Celsius.

Tuning up the fan speed to 100% and retesting the temperatures on Furmark, the GPU temperatures drop significantly and stayed between 68 to 70 degree Celsius.

GTX670 is one of the higher end graphics offering from NVIDIA, and therefore will work well in an gaming environment as well acclaimed by many gamers around the world.

The GTX 670 Mini from ASUS is a high end graphics card done in the right form factor. However, if there are ample space in the chassis, it will still be recommended to buy a full length GTX670. This minified version of GTX670 does perform a bit hotter than the usual due to its compact size. Luckily, the card runs extremely stable with the new cooling technologies incorporated such as the new CoolTech fan. Overclocking on the card is probably not recommended due to heat issues, but if a custom water cooling block is made for GTX670 Mini and the card is cooled by water cooling, its most definitely comparable to any standard sized GTX670.
What can I say? The GTX670 Mini’s main advantage is really its size. It’s a niched product, and will do well as there aren’t any other similar product made for the market.

The review was first published by poor_poor for The Tech Revolutionist.

Next-Gen Xbox will be available from November 2013 onwards